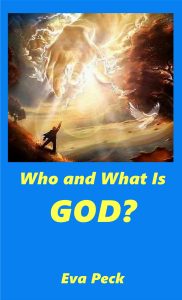 This small book, Who and What Is God, explores briefly and to the best of our ability the nature and qualities of God. Though God is largely incomprehensible to human minds, an attempt is made here to give glimpses of our Great Creator, Life Giver, Sustainer and Heavenly Father, based on the Bible and a less known revelation entitled True Gospel Revealed Anew by Jesus.

Who and What Is God touches on the nature of God, attributes of God, and how humans can build a relationship with God – in fact such relationship that will make them at one with their heavenly Father.

Readers are encouraged to consider and meditate on what is presented here with open hearts and minds and keep what resonates with them, while discarding what doesn’t.

Below is a part of the first chapter dealing with the Nature of God.

To begin with, God is Soul, and Soul is God. Not the soul that is in the created man, which is a mere image of God. Rather, God as Soul is a self-existent Deity, without beginning or end, and the source of all that exists. Nothing with which humans are familiar can be compared, even in the spirit perceptions, with this Great Soul Being.

God has a form, but He does not have a human form, as has been conceived of by man throughout the ages. His form is purely spiritual, as opposed to anything material, even if to the highest degree sublimated. Therefore, only those at a very high spiritual level whose soul perceptions have been developed through taking on the divine nature of the Father and who have thus become at one with the Soul of God, can perceive the Father.

God’s form gives him an individuality, substance and a seat of habitation, in contradistinction to the “god” that is said to be everywhere – in trees, rocks, thunder and lightning, humans and animals, and in all created things, and in whom people are said to live, move and have their being. To believe that God is without form would be to believe that He is a mere force, principle, or nebulous power, and the result of laws. This is not God.

However, all these manifestations in the universe are evidence of the existence of a substantial, never-changing, self-existing Being, who is not the creation of man’s mind, needs or desires. Rather, He is the Creator of all, even of those who cannot conceive of any God, but nature, which is the mere creature of His being, wisdom and power. He has established laws for the controlling and maintaining of His created universe, and humans can perceive and to some extent comprehend these powers and principles.

In addition to the form, God has a personality, and this is expressed and made known to humans by certain attributes existent in the universe. To some philosophers and scientists, these attributes are an impersonal God and the only God. They make the created to be the Creator, not realizing that behind the expression of all that exists must be a cause, which is greater than the attribute itself.

From God’s personality flow His attributes of life and Love, light, power, wisdom, etc. God is Spirit, but spirit is not God, only one of His qualities or attributes.

God has a location. It is high up in the heavens, and all spirits of the Celestial Kingdom and many in the spirit spheres are striving to get nearer and nearer to it. As they do, they feel the increasing Love, life and light that emanate from the Fountainhead of these attributes of perfection.

God is a God of Love, and wrath, as taught in the Bible, is no part of His nature. He has for His children on earth, as well as in the spirit world, only Love, solicitude, compassion and sympathy. He is not afar off waiting for the arrival of the Great Judgment day, in order to approve or condemn His children according to their deeds done on earth. Rather, He is with all humans and spirits in a way that His influence of Love and beneficence may be felt by them – if they will place themselves in a condition of soul receptivity. Indeed, the relationship and nearness of God to man depends, to a very large extent, on the will and desires of each person.

God then is Soul, and that Soul has a form, perceptible only to Itself, and to humans or spirits who, by reason of sufficient possession of the substance of the Great Soul have become like God, not in image only, but in very essence. Only individuals who have experienced the New Birth and become filled with the Divine Love of the Father, and hence are partakers of His Divinity, will be able to perceive this great truth of the nature and personality of God.

The book, Who and What Is God, is available as a free PDF download from here.  It is also available as Kindle.

For books on related themes, see The Greatest Love and Salvation. In fact, many of the books under the Spirituality arm of the site relate to the subject of God.